Not everyone who lost his life in Vietnam died there... men's bracelets $39.99
Sale!

Free worldwide shipping on all orders over $99

I love my new seat covers 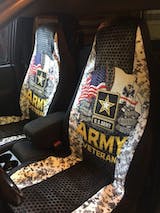 Installation was quicker than I thought even with removing the Safety belt guide prior to installation of the Seat Covers and replacement.
I place one set, of the two purchased, on my 1994 Firebird T-Top, there a bit baggie, even with the head rest up as far as it will go, I have to find a way to snug them up a bit.
The other one I planning on giving it to my girl friend, who spent 36 years in the Army Reserve, for Christmas. I do however wish I would have seen the Retired Army one first before I ordered.
FYI between us both we have 68 years of military service and her daughter is starting her 20th year of service in the US Army also, with one year of service in Afghanistan, We are proud of her. I spent 18mos in Viet Nam and was called up for Desert Storm- We are a military family.

-Constructed with high-quality polyester micro-fibre fabric for maximum durability and comfort.
-Add style to your seats while protecting them from spills, stains, tearing, fading and more…
-Designed for quick and easy installation on most car and SUV bucket style seats no tools required.
-Elastic backing and fastening system ensures a snug and secure universal fit on the most standard car and SUV seats.
– Dimensions: approximately 53″ x 20″ however they will stretch to fit most bucket style seats of any car and SUV
-Not for use on seats with integrated airbags, seatbelts or armrests.
-Package includes: 2 cover set